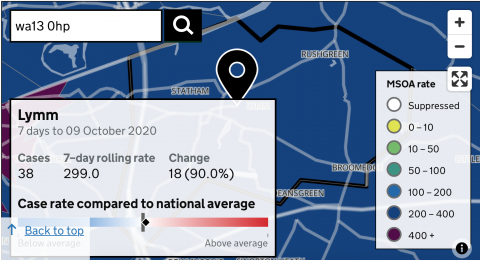 The links below provide local information for Lymm and surrounding areas. Numbers 1-3 are probably most useful for getting a view on the latest position in & around Lymm, the other links provide further information, collated details etc.

Lymm, in the borough of Warrington neighbours both Trafford (Greater Manchester) via Warburton and Altrincham as well as the borough of Cheshire East via High Legh & Little Bollington.

From the Gov.uk site (the link no.3 in the list above), Covid-19 cases by area link above, updated daily where possible covering cases for Lymm:

*data for 7 days to these dates was added retrospectively e.g. a week or more after this date

** data for 7 days to dates prior to 09/10/2020 is available but has had retrospective corrections made around early November. The table above shows data that was published on or shortly after the date shown but prior to early November 2020 no longer matches the official record.

Government restrictions would be imposed on Warrington as a whole (which Lymm comes under), even if or when Lymm cases were low / reducing